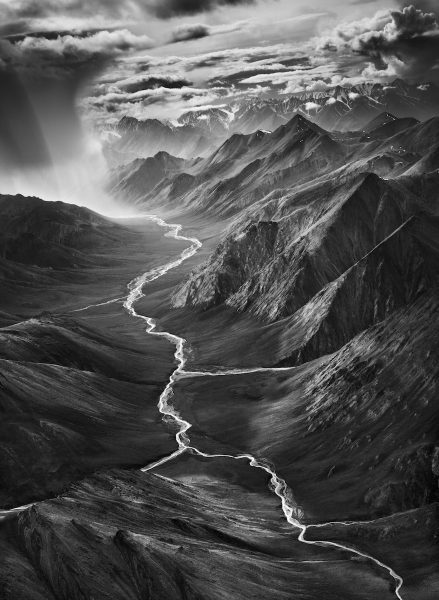 The Arctic National Wildlife Refuge (ANWR) in north-eastern Alaska is the largest wildlife refuge in the United States, covering no fewer than six ecozones and stretching some 200 miles (300 kilometers) from north to south. Along its northern coast, barrier islands, coastal lagoons, salt marshes and river deltas of the Arctic coastal tundra provide a marvelous habitat for migratory water birds. Coastal land and sea ice are sought by caribou seeking relief from insects during the summer and by Arctic bears for hunt-ing seals and breeding during winter.
This photograph was taken in the eastern part of the Brooks Range, which rises to over 9,800 feet (3,000 meters); the rugged stretch of mountains is sliced by deep river valleys and numerous glaciers. The immense variety of microclimates results from the collision of cold air from the Arctic and hot air coming from the Yukon River
region of central Alaska. Alaska. USA. June and July 2009